I regret that I cannot provide support for ASIPathFinder, but if you find it useful, please drop me an email and let me know! 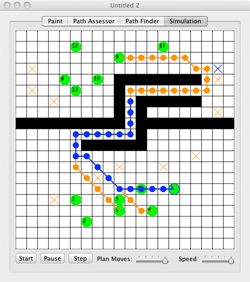 ASIPathFinder is a complete implementation of a cooperative path finding algorithm, and will probably be most useful for writing Real Time Strategy games. It is written in Objective-C, and is compatible with Mac OS and iPhone OS.

What is a co-operative path finder?

A co-operative path finder allows multiple objects to find a path on a map, planning ahead to alert other objects of where they’re going to travel. This means that an object can avoid other objects ahead of time, before they collide.

ASIPathFinder is based on code I originally wrote for my Space Harvest game for iPod Touch and iPhone. Download the game to get a feel for its capabilities.

I’ve deliberately made these instructions relatively general - they describe how ASIPathFinder works, but don’t make much detailed reference to the code itself. The code is fairly well commented, but the hard part is understanding the overall process, and that’s what I’ve attempted to cover here. Additionally, I hope this may be useful to anyone implementing their own co-operative path finder, regardless of whether they program in Objective-C or not.

ASIPathFinder is a variation on techniques described by David Silver in this paper:

I would strongly recommend reading this before doing anything with ASIPathFinder. Though my implementation is slightly different, the overall approach (reverse A* for initial assessment, with partial path finding and a reservation table after that) is taken directly from this paper.

ASISearchNodeList is based on the binary heap algorithm as explained by Patrick Lester here: