496 days after I started work on it, Begin, my project planning tool for iPad is finally in the AppStore! 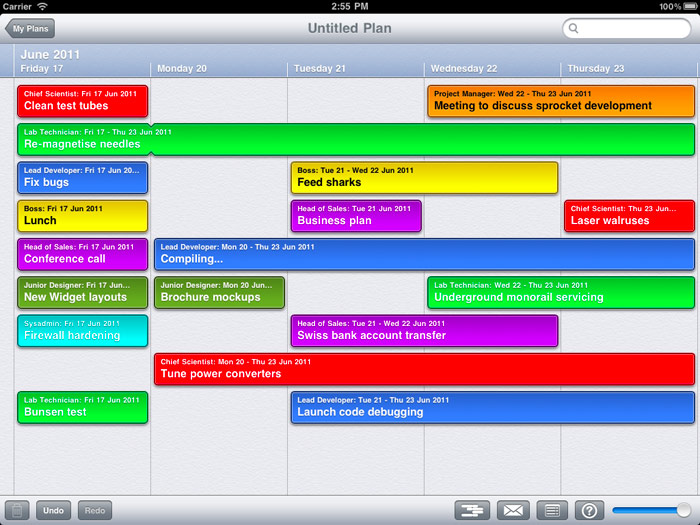 As I mentioned in the announcement on the Acknowledgement website earlier today, Begin is designed as the antidote to the complex project planning software everybody secretly hates. It doesn’t have dependencies, or resources, or critical paths, or any of the other shit that all proper project planning software is supposed to have. What is does have is a simple interface, and it creates plans that you don’t need super-vision to read.

The man who couldn’t finish anything

I had an idea for a project planning app for iPad at the start of last year. I wrote the first code for what was to become Begin at the end of March last year, and by the end of July the app was was pretty much finished. For a whole set of reasons (being busy with other things, my irrational fear of shipping anything that doesn’t have some sort of externally imposed deadline), it sat unchanged in Github until the end of May this year.

In the end, I decided that it was never going to ship a side project like this unless I got some people forcing me make it happen. So I got the amazing team at Acknowledgement (conveniently, where I work) to help out.

In the end, I think this long hiatus has resulted in Begin being a much better app. We found and fixed lots of bugs in testing, but more importantly, we worked hard to remove features that were much more complicated than they needed to be. For example, I originally had a whole templates system for plans that let you store and manage groups of labels to reuse in different plans. I’ve hacked out the whole thing, in its place is a much simpler system that lets you copy sets of labels between plans.

Anyway, the end result is easier to understand and use, and I couldn’t be more pleased with the way it’s turned out. A million thanks to everyone at Acknowledgement who helped out, especially @_chrisroberts, who is a sort of human/robot-hybrid testing machine that finds bugs no-one else can, and @BeadleHands for the amazing logo!

You can find out a little bit more about Begin on its website, or just grab a copy from the app store while it’s on sale at such a ludicrously low special launch price.