Huh! The ghosts of old men!

Two blog posts in one day! I hope this isn’t going to become a habit.

As promised, a small glimpse inside the mind of a struggling artist:

YOU are ALTRAZAZ, wizard of the north. No idea on the pronunciation, sorry.


I don’t know how old I was when I wrote this, but given that I’ve clearly taken steps to make it as professional-looking as possible (nothing says you mean business like a typewriter), I’ll assume it’s from before I even knew what a computer was.

This book is one of several attempts I unearthed at interactive-fiction, each in the style of one of the Fighting Fantasy books popular in the UK during the 1980s. I’m pretty sure the illustrated style of this book is directly lifted from a series written by Joe Dever and Illustrated by Peter Parr, though sadly neither my writing nor illustrating skills were up to much.

The first page is actually the only page that is typewritten. Presumably I gave up struggling with the keyboard and resorted to a pencil after I found I couldn’t make it work as I wanted.

The second paragraph is clearly cut and pasted from another book. Again, I don’t know if this is because I felt the rules of the original were too perfect to change, or because I couldn’t face copying them out by stabbing at typewriter keys. 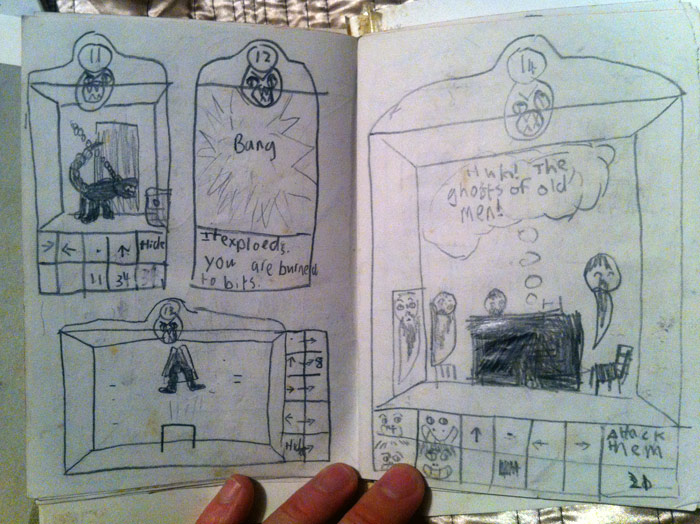 Itexploeds. you are burned to bits.


“Every child is an artist. The problem is how to remain an artist once we grow up.” (i)
Pablo Picasso

It’s often hard to go back and look at things I made a few years (or even a few months) ago. I see only the wrinkles, the bits I didn’t get right, the code that no longer makes sense. But if you go back far enough, you can ignore the implementation and see just the ideas.

I would love to get back inside the head of the child that wrote those words and drew those drawings. He understood the power of stories, and of the invented worlds (however derivative) in your head. And that not everything needs an explanation.

I think I will make an effort to be a tiny bit more like him.